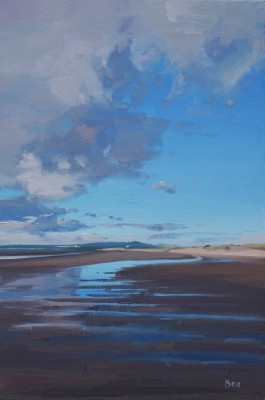 John Bell was born in Ayr in 1968 but was brought up on the east coast, in Fife. He painted from a young age but chose to pursue a career in Architecture, graduating from The Mackintosh School of Architecture in Glasgow in 1993. He has worked as an architect since then but has continued to paint and exhibit his work around Scotland and beyond.

John works in oils and paints landscapes and seascapes around Scotland. His subjects are often along the Ayrshire coast near his home in Troon, where the expansive shoreline and the ever changing weather provide unlimited subject matter. He is interested in the quality of light and colour in the Scottish landscape, particularly the sky, which often dominates his paintings. His brushwork and use of colour capture the movement of the cloud and the effect of the light on the land and the sea.