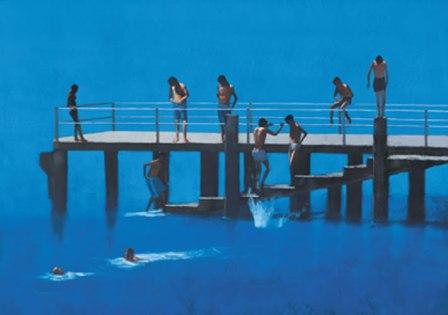 Peter Nardini is a graduate of Glasgow School of Art where he won the Cargil Award. He has been awarded The Amsterdam Residency by the Scottish Arts Council, The Paisley Art Institute award, The Ann Redpath Award by the Scottish Society of Artists among many others.

Peter Nardini is a regular exhibitor at the Royal Glasgow Institute of the Fine Arts; the Royal Scottish Academy, the Scottish Artists and Artist-Craftsmen, Edinburgh; Paisley Art Institute and several art galleries across Scotland and England. His paintings and limited edition prints are held in public art collections including the Scottish Arts Council and Lanarkshire Education Collection, as well as in private art collections in Europe and the USA.

Peter Nardini has a high regard for the paintings of the American artist Edward Hopper. Initially he was attracted by the mystery and intrigue created by the presence of figures in his compositions. Now Nardini finds himself drawn more to the drama, simplicity and timelessness of Hopper’s landscapes. Recently, Peter has been developing his landscapes and seascapes in particular, travelling from Glasgow to Tuscany, Switzerland and Southern California, to create works full of a sense of place. Bright sunlight and reflections are a constant recurring theme in his paintings and limited edition prints.

Music has always gone hand in hand with Peter Nardini’s art and he has released four albums to date. Nardini is also a talented singer songwriter, and has been described by Donny O’Rourke as ‘an artist with an eye and an ear for transforming detail, a man who can paint stories and sing pictures.’