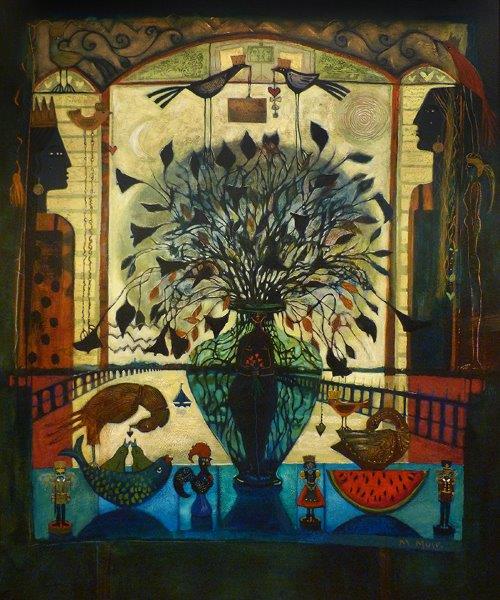 Morag Muir was born in Glasgow in 1960. She studied Fine Art at Duncan of Jordanstone College of Art & Design, Dundee from 1978-1982. She completed a year of postgraduate study in 1983, winning the John Milne Purvis Prize and the Major Travelling Scholarship, which financed further study in Italy.

Morag works from her studio in Newport-on-Tay in Fife, Scotland which has beautiful views across the Firth of Tay.
Her paintings mainly reflect the studio environment, and her still-life work incorporates narratives that develop when characters and objects begin to populate the canvas. Windows, flowers, textiles, toys and ethnic bric-a-brac share ambiguous spaces. The finished paintings portray layers of her personal life interwoven with her surroundings and collected memorabilia.

Morag is one of Scotland’s most prolific and dedicated contemporary painters. Her work is held in private collections around the world and she currently exhibits throughout the UK.