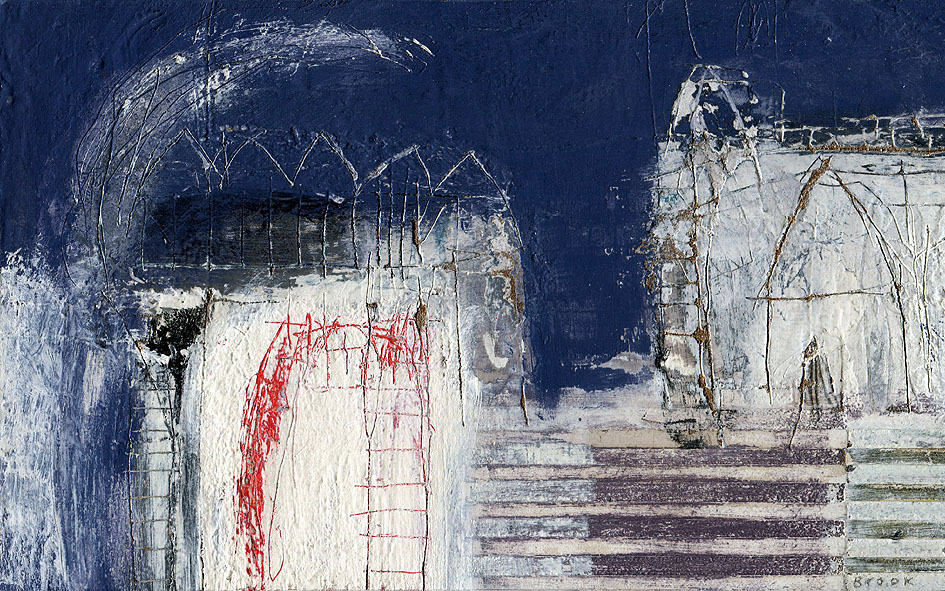 Born in Yorkshire in 1960, Chris now lives on the East coast in the Scottish Borders, is self-taught and has been working professionally since 1995.

Fusing both traditional and self-discovered painting and printmaking techniques, he tries to create pieces which possess a tangible and tactile quality.

Subject is predominately landscape driven, influenced by his surroundings and the proximity of where land meets sea, and a recurring theme of containment.

Never intended as site specific, instead the paintings are reconstructed ideals, a collection of marks and shapes to suggest a narrative, alluding to the type of place he would like to find.

The theme of containment is echoed further through naïve imagery, depicting boundary walls, furrowed fields, crop rotations and fence rails, he scratches directly into the work to offer a method of permanent mark making, over layered painterly surfaces.

Chris says to be immersed within a landscape is not only to be aware of a sensory visual, but also to be accepting of, and experience the visceral and elemental qualities which bind the surroundings together. The relentless extreme of the seasons blend millennia of formation, both natural and manmade, often disguising how our landscape is flawed. I have attempted to emulate these qualities through a sequence of layering and over painting, scraping away surfaces to reveal the partially hidden, suggesting traces of former occupancy, and to define the act of permanence through mark making, taking on the form of an intuitive, scored non-corrective line.